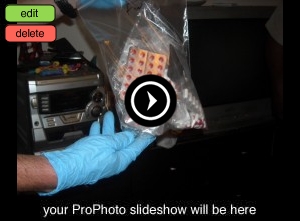 On March 22, 2012, Mobile County Sheriff’s Office was serving outstanding warrants when the deputies happened upon a residence full of marijuana, prescription drugs, cocaine, crack and meth.  MEAGAN RENE KINSEY, JOSEPH FLYNN WOLFE and CHRISTOPHER LASHAWN HOWARD were all arrested and taken to Metro Jail.  MCSO Deputies went to the apartment to serve JOSEPH FLYNN WOLFE with 3 outstanding traffic warrants.  When Deputies arrived at the door, CHRISTOPHER LASHAWN HOWARD ran past the deputies in the apartment and slammed the door.  MEAGAN RENE KINSEY answered the door and Deputies immediately saw the drugs at the door.  MCSO called for Narcotic Deputies who also came with a search warrant for the residence.

MCSO Deputies searched the residence and found high grade marijuana, zanex, loratabs, cocaine, crack and meth.  Deputies also found several packs of pseudeoephedrine, Coleman fuel, coffee filters and other precursors that are used in the manufacturing of meth.  A meth lab was not found inside the residence however, several vials of the finished product were on display.   “Even though we did not actually catch them cooking the meth, the intent is implied by the combination of the material,” says Sheriff Sam Cochran.

The Meth Initiative, designed by the Mobile County Sheriff’s Office, targets meth users and manufactures through three areas of focus:  Enforcement, Compliance and Education.  To report meth, text the word “meth” to 839863 (“textme”) or call 574-8633.