Sister sets up other sister on drug buy 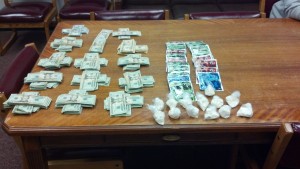 On December 22, 2013 Mobile County Sheriff’s Office went to 5000 block of Huron Drive in response to an anonymous tip referencing drug activity.  MCSO Narcotics, k-9 unit, Patrol and major crimes arrived at the Huron Drive address and found JENNIFER TROTTER running from the back of the residence.

MCSO captured TROTTER and found 13 ½ grams of cocaine in her purse.  TROOTER cooperated with narcotics investigators and said that she had received the cocaine from her sister, ANGELA WASHINGTON.  Inside TROTTER’S residence were 18 packs of spice (poisonous marijuana) also said to belong to WASHINGTON.

MCSO set up a buy between the sisters.  WASHINGTON delivered cocaine and Spice to TROTTER’S residence and then tried to flee the scene once she discovered Narcotic Deputies.  WASHINGTON was captured and Deputies seized additional cocaine, Spice and $24,500.00 in cash that was inside her vehicle.