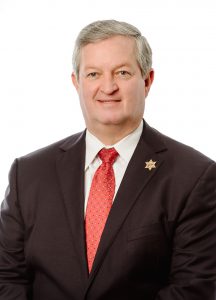 Sam Cochran is a native Mobilian who graduated from the McGill Institute and went on to attend the University of South Alabama where he holds both a bachelor’s and master’s degree in criminal justice and public administration. He is also a graduate of the FBI National Academy.

He began his law enforcement career with the Mobile Police Department as a police cadet where he spent 31 years working his way through the ranks, serving the last 10 years as Chief of Police.

Sheriff Cochran serves the community on numerous agency boards, including the Penelope House, the Drug Education Council, and the Alabama Safety Institute. He was appointed by the Governor in 2015 to serve as a Commissioner on the Alabama Police Officers Standards and Training Commission. He has also served on the board of the Boy Scouts of America and the Child Advocacy Center.

Sheriff Cochran and his wife Sabrina have four children and four grandchildren.