Mobile County Sheriff’s Office is looking for REGINALD ELLIOTT STEVENS for questioning involving a robbery 1st at the FAMILY DOLLAR on McCrary Road that occurred on May 6, 2012.  The suspect in the Robbery was seen driving a GRAY MITSUBISHI GALANT (2B85S06). This vehicle is registered to REGINALD ELLIOTT STEVENS.  The description of the suspect given by witnesses on the scene matches that of REGINALD ELLIOTT STEVENS.  As the suspect demanded money from the clerk, he lifted his shirt exposing a black handled hand gun.  Nothing was taken during the Robbery due to the clerk advising that once she opened the cash register drawer, law enforcement would be there in less than a minute.  The suspect then fled the scene in the listed vehicle. 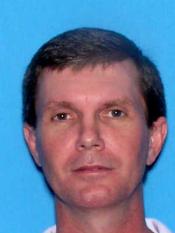