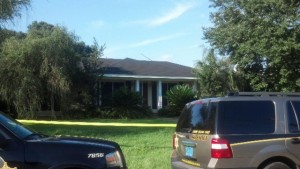 Mobile County Sheriff’s Office responded to 7275 Pecan Terrace Drive Theodore in reference to a  911 call claiming a known male (Terry Wayne Wilson) came into their home and attempted to attack her husband (Ronald Davis) with a knife. In defense, Ronald assaulted Terry with a baseball bat resulting in Terry’s death.   The 911 caller, Anita Davis, said  she was not home when this incident occurred but was notified by her husband Ronald Davis. When Anita arrived at the home she called 911. The investigation is still ongoing at this time.   Terry Wilson was living at the residence with Anita and Ronald Davis